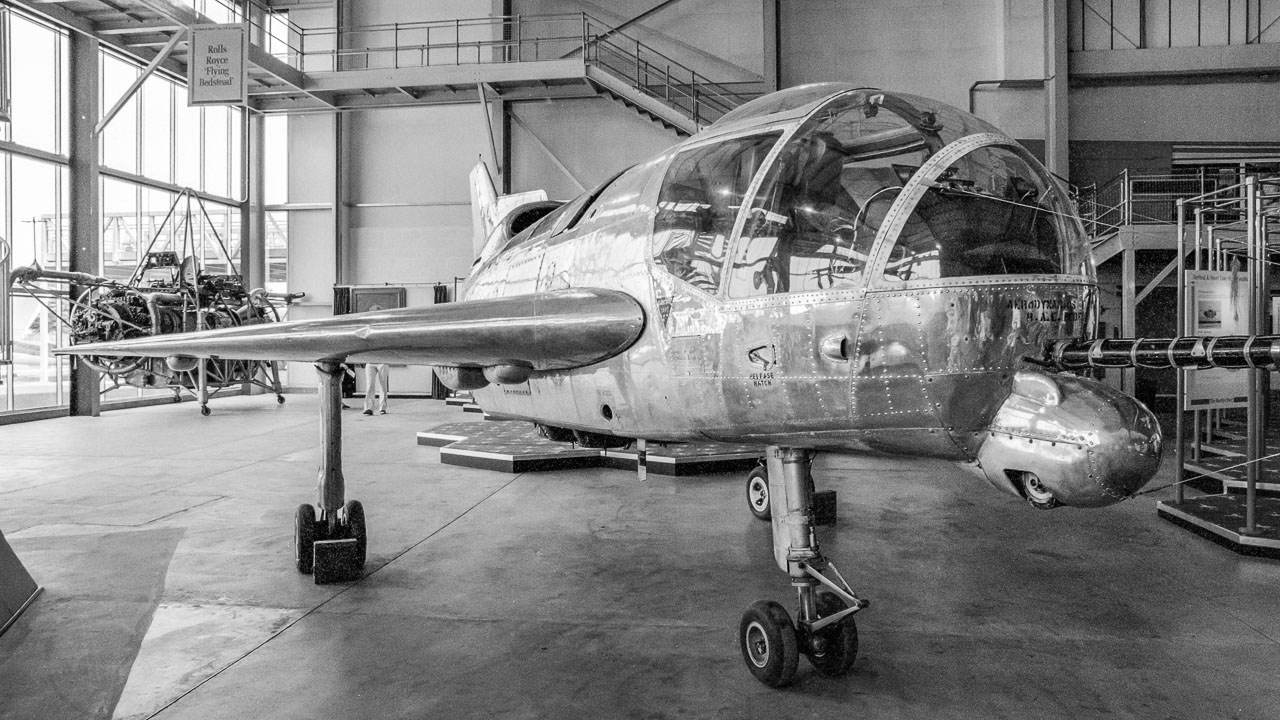 It must be considered that there is nothing more difficult to carry out nor more doubtful of success nor more dangerous to handle than to initiate a new order of things; for the reformer has enemies in all those who profit by the old order, and only lukewarm defenders in all those who would profit by the new order; this lukewarmness arising partly from the incredulity of mankind who does not truly believe in anything new until they actually have experience of it.
Nicolo Machiavelli (1469 - 1527) -The Prince

Innovation can be a long and arduous voyage of discovery designed to fulfil an unmet need. Often the need my not be immediately apparent to the ultimate beneficiaries. Inventions can build on discoveries arising from a prior succession of pure and applied research developed over eons.

Development of vertical take-off and landing (VTOL) combat aircraft, epitomised by the Harrier Jump Jet end-product, is a case in point.

The story begins with the turbo jet engine development necessary to fulfil the required thrust to weight ratio.

The first turbo jet engine patent was lodged in 1921 by Maxime Guillaume, an agricultural engineer. Unfortunately, the idea was ahead of its time. The materials and manufacturing processes needed for realisation were not available.

Frank Whittle, a name that will always be associated with jet engine innovation, was able to draw on such prior art for inspiration. An earlier example was the addition of a vaned compressor or supercharger to force fuel-air mixture into piston engines to increase power output. This innovation can be traced back to an 1858 Gottlieb Daimler patent, & was used to boost the power of aircraft and racing car piston engines in the 1920’s and 30’s. The Rolls Royce Merlin aircraft engine, the MG Q-Type, Birkin’s Blower Bentley & the Auto Union racing cars were prominent examples. 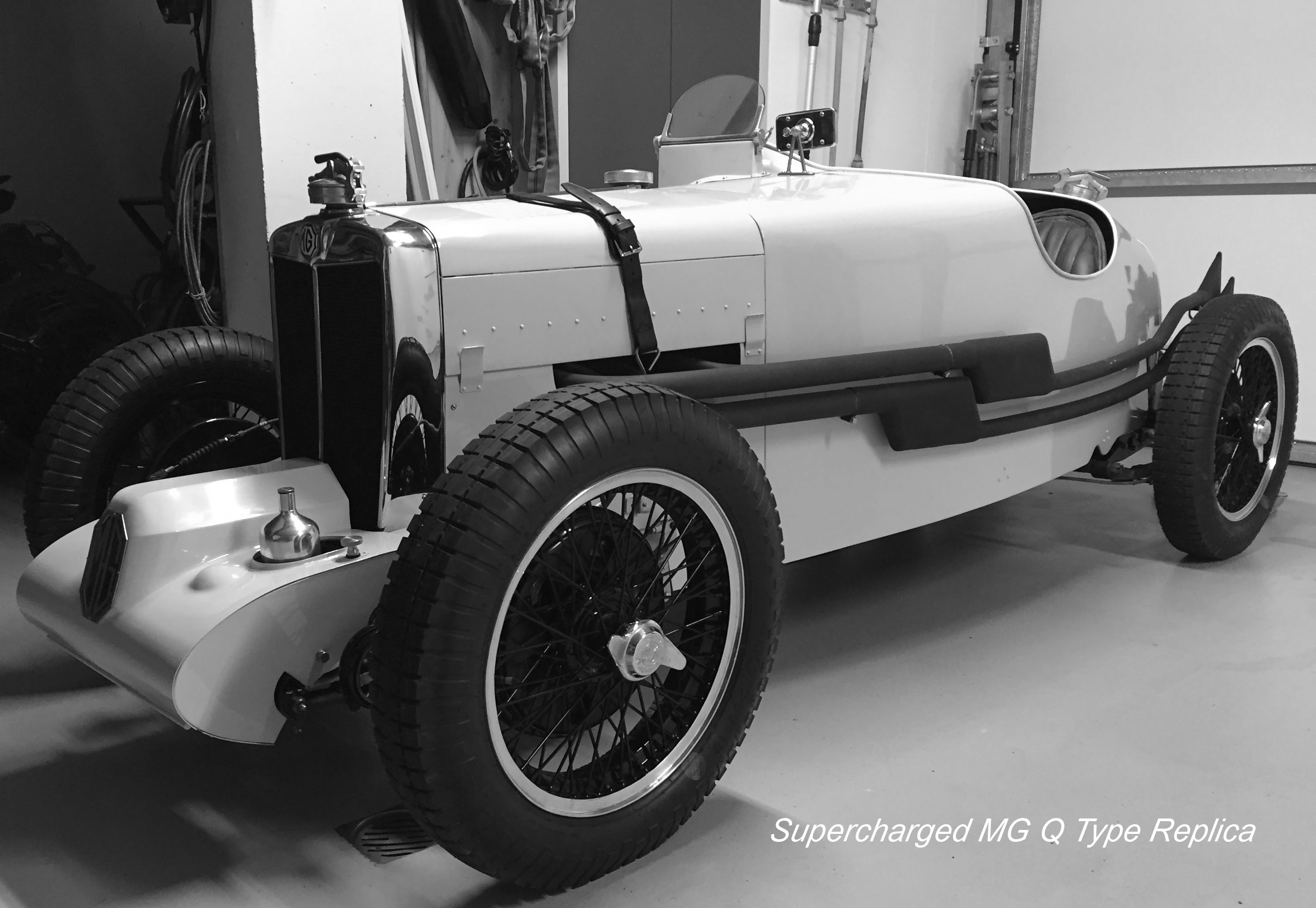 A replica of a supercharged MG Q-Type Racing Car circa 1934 built by the author – a front-mounted Zoller vane-type supercharger boosted output of the diminutive 746 cc engine to 146 bhp or 200 bhp per litre, the highest specific output of any engine at the time

Another innovation, essentially an afterburner attached to a propellor engine, was described by Whittle in his final year thesis at Cranfield. In this case a compressor driven by a piston engine forced air into to a combustion chamber whose exhaust was used directly for thrust. Known as a Motor Jet, the idea can be traced back to a patent filed in 1908 by René Lorin.

When investigating the origins of innovations, it can be a case of how far back you want to go. Quite often, at the outset, a patent search of prior art can be informative. Aspiring inventors may find that the pristine soil they envisage to root their new idea is in fact a well-trodden pathway.

Brilliantly, Whittle came up with the idea that the piston engine could be eliminated to arrive at the idea of a Turbojet, a nice illustration of Occam’s Razor Principle.

In April 1937 the first protype, the Whittle Unit (WU), ran successfully on a test bench, a key milestone that proved the basic design principles.

The general arrangements needed only incremental developments to become the basis of today’s turbojet designs. Air was ingested by a centrifugal vane compressor mounted on a rotating shaft that also drove turbine blades at the rear. Compressed air was routed to a horn shaped combustion chamber that spiralled around the engine case. Fuel was injected into the chamber and the fuel-air mixture was ignited by a spark plug. The hot gases were routed back into the casing downstream of the compressor to exit via the rear turbine blades to produce thrust in a self-sustaining manner. The engine was started and taken to critical speed using a contemporary 10 hp piston engine connected to the shaft via a clutch. Later field arrangements were to use an electric motor.

By 1940 the evolved W.1 Turbo Jet had been bench tested. This featured a group of combustion chambers organised radially around the engine casing to provide a compact and efficient outcome. 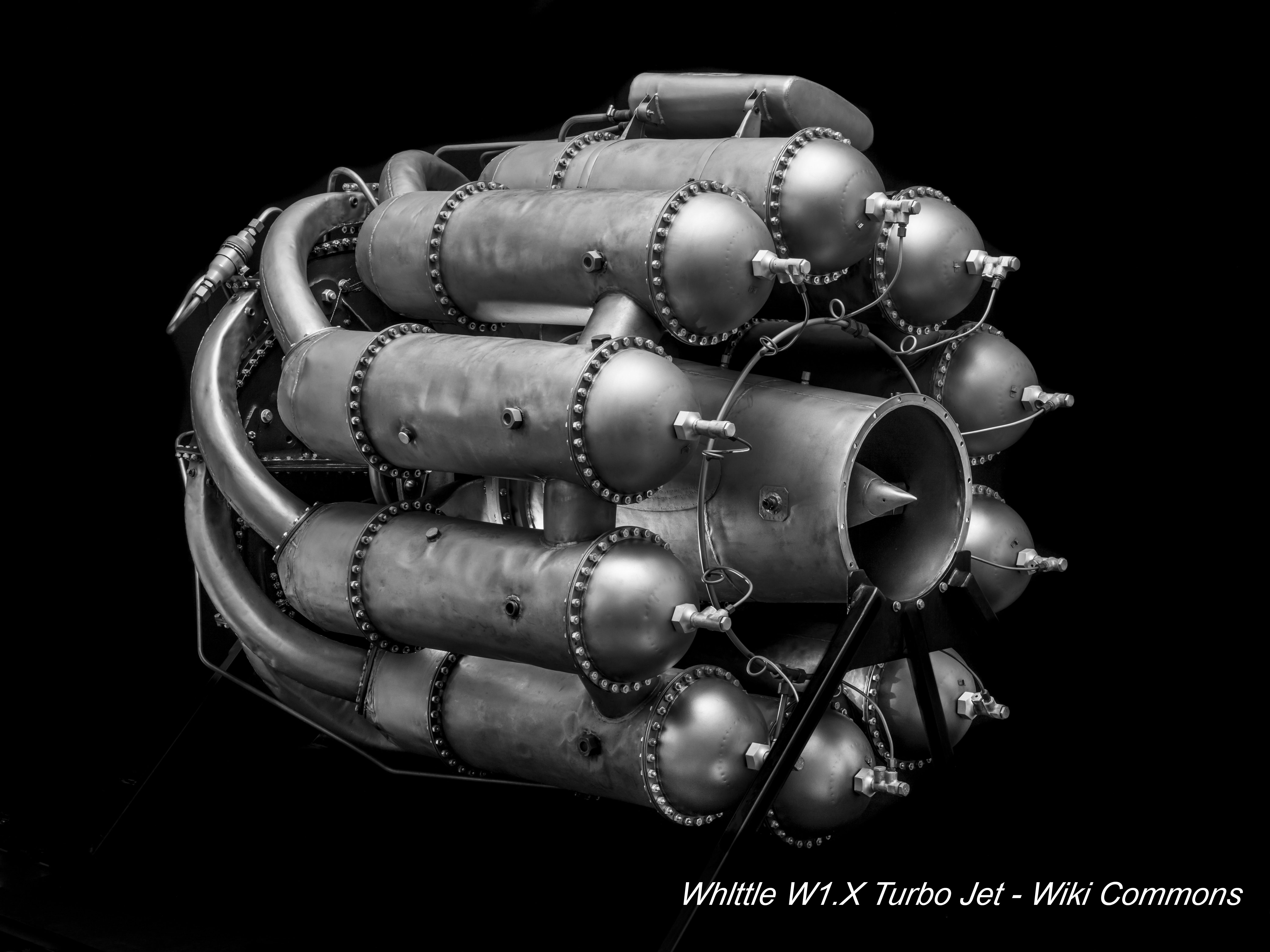 The ability to demonstrate the evolved prototype was to prove a key milestone as it attracted the attention of Ernest Hives, chairman of Rolls-Royce who offered to make any parts Whittle required at their Derby experimental shop - a breakthrough moment for both parties.

From Whittle’s standpoint the helping hand was welcomed as he was having to sustain the research and development from a trickle of private funding with, amazingly, scant support from the UK Government.

The arrangements put Rolls Royce on the road to jet turbine development which commenced with the Derwent, something they were able to do royalty-free as lack of funding had caused Whittle’s patent to lapse.

Also, the UK Air Ministry placed a contract with Power Jets for construction of an engine for flight testing based on the W1 demonstration

In 1941 the W.1 powered the Gloster E.28/39, the first jet aircraft to fly in the United Kingdom, another key milestone in the innovation life cycle.

(As an aside the German authorities were less inhibited than the UK Air Ministry and proceeded to with a well-funded jet development programme ironically inspired by Whittle’s patent, and were the first to demonstrate jet propelled flight).

By March 1944, after discussions with the Air Ministry, Whittle, who was constantly battling with cash flow challenges and was exhausted, reluctantly agreed to the nationalisation of Power Jets Ltd. for £135,000, and the company became Power Jets (Research and Development) Ltd.

The more establlished aircraft companies were now to be the beneficiaries of a flow of Air Ministry and RAF contracts.


The next chapter in the story was the development in 1944 of the Rolls Royce Nene RB 41, a centrifugal compressor turbojet engine with a design target thrust of 5,000 lbf, making it the most powerful engine of its era, and able to hover a weight of 5000 lb.

As an experiment, two Nene engines were mounted back-to-back in the pioneering Rolls-Royce Thrust Measuring Rig (TMR). It first flew untethered in 1954.

The Flying Bedstead, as it was fondly called lacked any lifting surfaces. It proved that flight purely from the vertical thrust of two turbo jet engines was feasible.  Inclining the rig by bleed jets mounted on outriggers created a thrust component for horizontal movement that was remarkably effective. An early challenge was thrust control lag which called for skilled and brave piloting. Fuel efficiency was another challenge.

The Proof of Concept contributed to a greater understanding of the level of power and control involved in a VTOL aircraft and proved the feasibility of the concept.

The experimental Short SC1 took the idea to the next level.

Expediently it was powered by an arrangement of five Rolls-Royce RB108 turbojets each with a thrust of 2,500 lbf. Four were used for vertical flight and one for conventional horizontal flight. The SC1 proved sustained forward flight at the expense of the extra weight of the four engines used for VTOL. A fly-by-wire system was also introduced for pilot assistance.

The full transition to in-service flight of the Harrier Jump Jet required the development of the application specific Rolls-Royce Pegasus engine. The design recognised that a mission would spend only a fraction of its time in take-off and landing, so the power arrangements needed to be optimised for forward flight.  The design enabled controllable and progressive horizontal and downward thrust via four swivelling nozzles egressing from a single turbojet body. 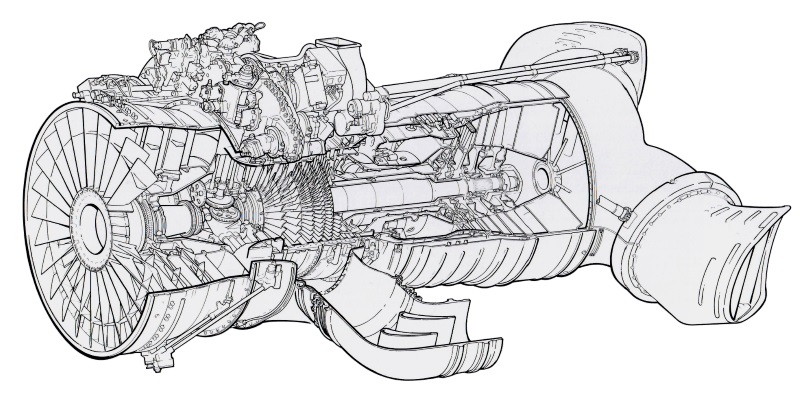 Machiavelli was right, innovation can be a long & arduous journey of discovery involving iteration through a succession of invention, validation, and back-to-drawing board steps.

Available materials, technologies and manufacturing capabilities can be a constraint. In the case of the VTOL challenge the availability of engine technology with the necessary thrust to weight ratio & ultimately controllability, reliability & endurance required a lot of development.

It can take a long time from idea gestation to full realisation & adoption of benefits. Adoption will require prototyping & field demonstations to convince sceptical beneficiaries. Once adoption is underway issues of scalability at acceptable cost will present themselves that ideally will have been addressed at the Problem/Opportinity exploration phase.

Deep pockets & faith on behalf of investors is required, as is perseverance by innovators.

Today’s accelerated rate of technology development, especially in the transformative digitalisation space, means the new idea space is highly contested. This calls for deep analysis of the Problem/Opportunity Space as a precursor to solutions design.

In our edge computing case the equivalent of the enabling jet engine is a System on Chip (SOC) that has the computing power to accomodate the variety of applications that may be encountered at the network edge. These include Industrial IoT, Network Function Virtualisation, Software Defined Networking & Machine Learning Model rendering.  All need to be accomodated in real-time in Size Weight & Power Constrained (SWAP-C) rugged passively cooled packaging ideally using cloud-native style frameworks.  More on this in a later blog.